Get your free chart today!

We will send you a link to the free chart by email. You can then print it out.

Send me the free chart

Get 3 FREE interactive scores for your instrument!

Thanks to Tomplay, you can play your favourite music with professional audio accompaniments.

Get my free scores
Login
Get Unlimited Access to All Sheets for 14 Days Try it for free
We use cookies to improve our site and your experience. By continuing to browse our site you accept our Privacy Policy. ✖
Go back

8 Great Sheet Music Titles to Play on the Viola

Share
Written By
Clara Avrillier
About the author
Clara Avrillier was introduced to music from a young age, firstly singing in choirs, and then playing percussion in several orchestras before going on to study piano and classical music in Scotland. Following a master’s degree in linguistics, she now brings together her musical and language skills to accompany you on your journey with Tomplay.
Date published
05/10/2022
Show/hide details

8 Great Sheet Music Titles to Play on the Viola

In the 16th and 17th centuries, the word ‘viola’ was used to refer to any bow and string instrument. It was only during the 18th century that it became known as the wonderful instrument we know it as today. Slightly bigger than a violin, the viola strings are lower, giving it a richer and warmer sound than its cousin. We’d like to highlight this fantastic instrument by sharing some of our favourite pieces for viola, from beginner viola sheet music to more challenging works. These pieces are available for solo viola or include the audio accompaniment.

▶️ Play Howl’s Moving Castle - Theme: The Merry-Go-Round of Life by Joe Hisaishi on the viola

Joe Hisaishi is one of the most famous anime composers of all time. His unique musical style has graced the scenes of many anime films, notably those directed by the legendary Hayao Miyazaki. Together, this iconic duo have changed the way a whole generation views Japanese animation.

In 2004, the pair worked on the film Howl’s Moving Castle. The story follows a young girl, Sophie, and the wizard Howl. They begin to develop a lovely relationship but it is soon tested when an evil witch casts a spell on Sophie, turning her into an old woman. Howl must fight against the witch in order to break the spell.

The theme song of the movie is The Merry-Go-Round of Life, a delightful waltz that reflects the ups and downs of life. This is a great piece to work on musical expression thanks to the lyrical melody and changing ambiance of the work.

Tomplay offers the piece The Merry-Go-Round of Life by Joe Hisaishi from Howl’s Moving Castle in an easy to intermediate level. You can play this easy viola sheet music title in a duet with the piano, or as part of a viola quartet.

The next piece we’d like to highlight is actually a collection but each work is so wonderful, it would be impossible to only choose one.

In 1786, Wolfgang Amadeus Mozart wrote a set of pieces for French horn, inspired by his friend Ignace Leitgeb, a virtuoso French horn player. The set was titled The Twelve Duos for French Horn and these beautiful pieces are staples in French horn repertoire. Later on, the collection was rearranged for various pairs of instruments, including the violin and viola.

Explore Mozart’s collection of 12 Duets for violin and viola, K. 487 with Tomplay. It is set at an easy to intermediate level and you can play each piece in a duet with the violin part. 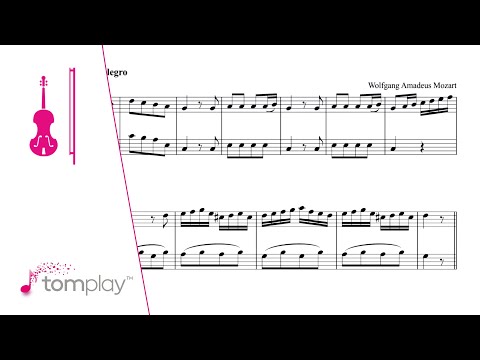 The film Schindler’s List was directed by Steven Spielberg and released in 1993. It has been named as one of the best films ever made thanks to its inspiring story, incredible cast and overall film style. The plot is based on a German industrialist during World War II who saved the lives of thousands of Jewish people from the Holocaust.

Such an important film therefore required a composer who would be able to convey the harrowing nature of the story. Legendary composer John Williams was the man for the job. After watching the film for the first time, he said to Spielberg: "This is truly a great film! You need a better composer than me." Spielberg replied: "I know! But they're all dead!".

Despite Williams’ incredible talent and experience as a composer, it certainly wasn’t a simple task composing the theme song for Schindler’s List. It required writing a piece that reflected the tragic story in a way that was both emotional and simple, without overdoing either one. Williams chose to write a classical piece, which he then gave to violinist Itzhak Perlman to play. The piece won him an Academy Award for Best Original Score.

The viola is an excellent instrument to play the theme tune of Schindler’s List - it is a melancholic, slow piece and the deep, rich sound of the viola marries beautifully with the accompaniment.

With Tomplay, you can play Schindler’s List - Theme accompanied by the orchestra. The piece is available as easy viola sheet music, as well as for more advanced levels. You can also opt to play it as a solo viola sheet music title, by simply muting the audio accompaniment track. 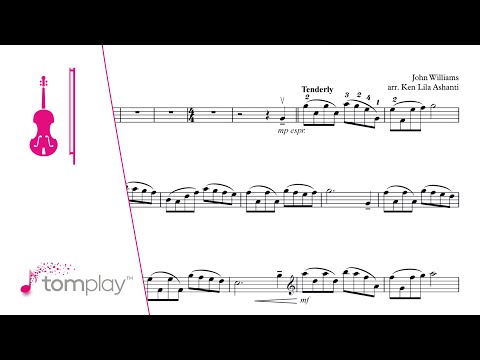 Although Bach’s Cello Suites were written in the 18th century, they were only rediscovered and published in 1825 and even then, they were not highly regarded until the 20th century. It all changed when a 13-year-old Spanish cellist named Pablo Casals found an old copy of the suites and fell in love with them. He began to learn the music and perform them in public, and decades later he recorded them. Thanks to Casals, the suites were given a public platform, leading to them being firmly established as some of the most influential cello works ever written.

The most popular suite is the first one, Suite No. 1 in G major. It is a set of six pieces: Prelude, Allemande, Courante, Sarabande, Minuet I & II and Gigue. The Prelude is a masterpiece made up of arpeggiated chords that create a rocking pattern of notes. This piece is the epitome of Baroque cello music.

Tomplay is delighted to offer the viola adaptation of Suite No. 1 in G major, BWV 1007 - I. Prelude. Despite being only a few minutes long, it contains a plethora of tricky techniques therefore it is set at an advanced level. Play this solo viola sheet music title with Tomplay and learn one of the greatest works ever written. 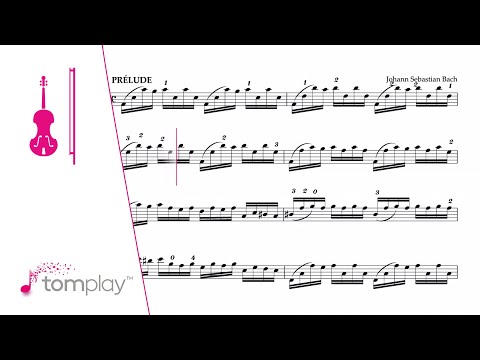 In 1985, Piazzolla wrote a four-movement work titled Histoire du Tango for flute and guitar (the instrumentation of choice when the tango was first performed). His aim was to teach listeners about the history and evolution of the dance. Cafe 1930 is the second movement of the composition. Originally, tango music was high-spirited and fast to accompany the dance, but around 1930, it evolved into a much slower, more romantic style that people would prefer to listen to and enjoy. This is the part of the tango history that Cafe 1930 conveys.

The Tomplay viola arrangement of Cafe 1930 is a duet with the guitar, although you can mute the guitar part so that it is a solo viola sheet music title. There are various techniques and challenges to get to grips with, for example, the sudden changes between legato and staccato playing, the mix of rhythmic texture and of course, the musical expressivity of the work. 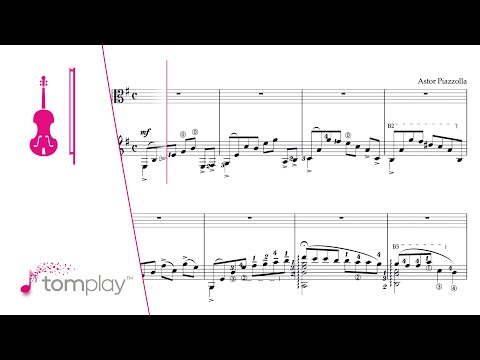 Sergei Rachmaninoff is considered one of the greatest composers of the end of the Romantic period. In the summer of 1912, he completed a collection of 14 Romances, Opus 34. The first thirteen songs contain text, but the last piece, Vocalise, is wordless. Some criticised his choice to have no text while others felt that the lack of text contributes to the intensity of the work itself. When questioned, Rachmaninoff said that the music would convey and express his idea better than words ever could.

It was originally written for voice and piano (with the singer choosing one vowel to sing the melody on) however nowadays, it is frequently played in different instrumentation rather than with the voice. Rachmaninoff himself also arranged the piece for orchestra (in 1915). The piece is very expressive and conveys both great happiness and profound sadness. It’s a magnificent work.

Thanks to Tomplay, you can play 14 Romances, Opus 34 - No. 14 Vocalise on the viola as solo viola sheet music, or accompanied by a high-quality recording of the piano part. It is an intermediate to advanced viola sheet music title. 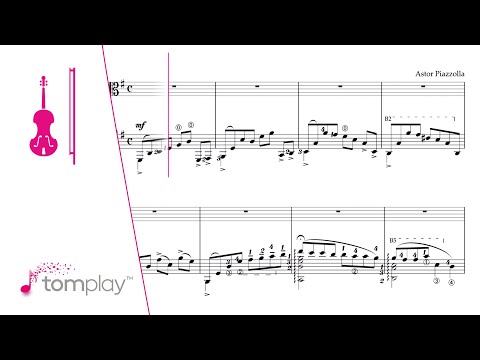 We Don’t Talk About Bruno from the Disney film Encanto

For decades, Disney has touched the lives of millions of people. The Walt Disney Company was founded in 1923 by brothers Walt and Roy O. Disney. Since the company began, they have produced hundreds of Disney films. One of the most important elements in each Disney film is the music: it’s simply magic. Each piece of music is specifically composed for a film, which makes it unique.

The Disney film Encanto was released in 2021 and tells the story of Mirabel and her family who live in Encanto. Everyone has a magical gift, except Mirabel, but she learns that their magic may be in danger and sets out to stop it. The film was an immediate hit, partly thanks to the music written by Broadway legend Lin-Manuel Miranda. The songs are in both English and Spanish.

We Don’t Talk About Bruno is performed by the family members and is a Latin pop and salsa song. What makes the song really unique is that as each member sings, the musical style changes to suit their character.

Discover the easy viola sheet music for We Don’t Talk About Bruno, as well as intermediate level scores. You can play this upbeat piece on the viola accompanied by the orchestra, or simply mute the accompaniment and play it as a solo viola sheet music title. 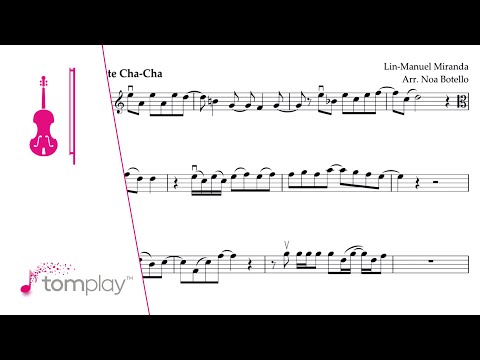 House of the Dragon - Main Theme by Ramin Djawadi

Game of Thrones is an American series adapted from the novels by George R.R. Martin (A Song of Ice and Fire). This fantasy-mediaeval saga is famous for its realism and for the inspiration it takes from real historic events, locations and characters. It has been hugely successful all over the world.

The series was such a hit that in 2022, a prequel titled House of the Dragon was released. It is set 200 years prior to Game of Thrones and is based on the House Targaryen.

Both series use the same theme song written by Ramin Djawadi. Djawadi chose to make the cello the star of the show in this work because its darker sound reflected the dark story of the show. The composition flits between major and minor keys, another nod to the unpredictable and ever-changing plot of the series.

Thanks to the viola’s rich sound, it is also a great instrument to perform the House of the Dragon - Main Theme. This viola sheet music is available in several levels of difficulty, so whether you’re a beginner or advanced player, you can try out this iconic theme tune. 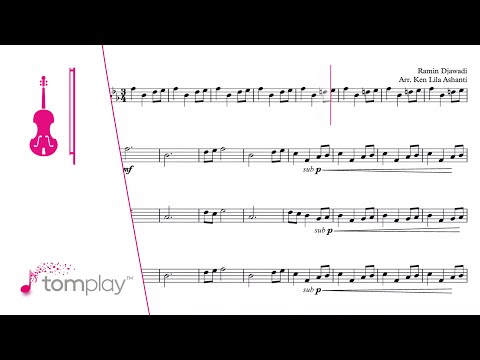 10 Popular French Songs to Play on the Piano

The Most Beautiful Songs by Famous Composers to Sing